Weeds are often the biggest frustration a gardener deals with, but it usually doesn’t have to be that way. How to get rid of weeds from the flower beds in your landscape is a question you will be dealing with at some point very early in your gardening endeavors.  How you address this issue will determine to a large extent how happy you are with your garden.

What is a weed? Everyone can identify one when they see it, because they are unsightly and look out of place where they grow.  In the grand scheme of things, weeds are actually beneficial to the ecosystem for soil conservation, nutrient retention, and food for insects and animals among other things.  But that is of little consolation to the gardener whose yard and beds are overrun in the spring with their ugliness.

Basically a weed is a plant that is not grown intentionally and is not anted in the area that it grows.

Where Do They Come From

Weeds are not welcome in our gardens so what causes them to show up in the wrong places and at inopportune times? Weeds, like desirable plants, are identified as either annual or perennial.  Annual weeds grow and then die during the same season, while perennial weeds live longer than one growing season.

In the case of annual weeds, they die, but before they do they produce massive volumes of tiny seeds that are left behind to form the basis for the same weeds to appear the next year. And even worse, the seeds that are produced are spread by the wind, and even potentially through animals, so areas that may not have had weed infestation in the past are potential targets for them the next season.  These seeds can remain dormant beneath the soil surface for years.  Then when the right conditions exist (proper temperature, exposure to sunlight, and moisture) the seeds germinate and produce the weed.  It is often the soil cultivation that is done while starting a new bed or replacing annual plants that creates the conditions needed for germination.  We’ll discuss how to deal with this later in the article.

Perennial weeds are different in that they reproduce vegetatively as is the case with desirable perennial plants. This allows them to develop deep root structures that make them hard to get rid of.  The roots, or their shoots, survive and regenerate even if the weed is pulled at the surface.

In addition to being either an annual or perennial, a weed is also classified as either grassy or broadleaf. Grassy weeds look like a form of grass, blade like, but they are not what you want growing randomly throughout your beds or lawn.  Broadleaf weeds have a leafy structure.

Weeds can also be described as cool season or warm season. Cool season weeds appear around the end of winter to early spring.  Warm season weeds, as suggested, during the late spring and summer months.

How to prevent most weeds from ever appearing

The best way to control weeds is to keep them from appearing at all. By doing the various garden fundamentals well you can go a long way toward discouraging weeds in your flower beds and lawns. These basic things include mowing frequently and at the proper height, feeding beds and lawns at the correct times with the right kind of fertilizer, and wise usage of watering. As mentioned above, weeds fall into categories, and how you control them depends not so much on what type of weed it is but knowing which category it is in and knowing how to treat that particular category.

A Pre-emergent can prevent annual grassy or broadleaf weeds from ever germinating. However it is critical that these products be applied properly and at the correct time or they will not be effective. If germination has already occurred applying a pre-emergent is all for naught. To control cool season weeds (those that emerge in March-April) apply the product no later than the first week of September, when it is still warm to hot. For warm season weeds the time to apply is a little more open ended. It needs to be applied about a week before the average date of the last freeze of your area. But remember, if you can already see weeds, then it is too late for a pre- emergent to work.

Mulches are your best friend. A 2-3 inch layer can prevent weeds from penetrating the soil and even from germinating. Mulch consists of various forms of organic matter that is in some stage of decay. The decay is what restores raw materials to the earth that are taken away by plants. The mulch serves to conserve moisture and lowers the temperature at soil level. It serves to exclude sunlight, which helps prevent weed germination. As a result, mulching helps to prevent weeds in your flower beds and allows more nutrients in the soil to be available for your plants. If you can control weeds by mulching, you can avoid needing to apply herbicides to get rid of them. An additional benefit is that they add an attractive feature to the bed.

Weeds can be controlled from a bed by pulling them upon first sight. Despite the mundane nature of this approach it is still the most effective way. The goal in pulling is to get the weed before it gets too large, and to get the entire root. You can use a garden hoe or a digging tool to assist with getting the root. Once you have cleared your bed of the weeds apply a layer of mulch to help discourage others from appearing.

This can be done when starting a new planting bed, but it requires patience on your part. The  raking and tilling that is done in getting a new bed ready to plant is one of the main things that activate the seeds beneath the surface of the soil. After you have established your bed wait to plant until weeds begin to show on the soil surface. Water the area to provide moisture. In a few days you should begin to see small weed seedlings come up to the surface. At this time you want to rake them away or kill them with a glyphosate spray such as Roundup. Then you repeat this same process. Let the weeds just appear once more and then water, rake, and kill. Now you can plant and apply mulch to the bed.

One effective way to control weeds from the flower beds is to use newspapers with your regular mulch. For example, you have a planting bed with or without existing plants, but weeds have already appeared. Spread a thick layer of newspapers throughout your bed and over the existing weeds, dampening the papers to solidify the base. Then apply about a 3 inch layer of mulch over the newspapers. The papers will provide an additional barrier that will choke those existing weeds and keep new ones from germinating. If you haven’t planted in the bed yet then leave an open space for the places you are going to dig in order to plant. This process will need to be repeated about once a growing season, with a new layer of newspaper put down each time.

Use a post-emergent herbicide

Broadleaf weeds that have already appeared can be controlled by a post-emergent spray. Their leafy nature allows you to carefully apply the product to the leafs and not get the spray on desired growth. If you do this, be careful and apply when the wind is not blowing very hard.  Unfortunately this does not work for the grassy weeds in lawns because they really cannot be applied without killing existing turf. Using a pre-emergent is the only effective method for controlling these weeds. 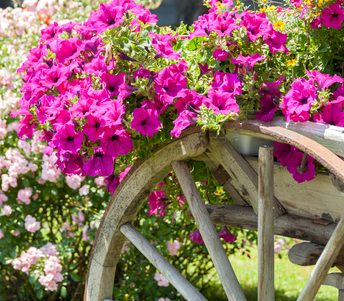 There are many ways to measure a man.

One of these is to observe how he treats people who are not in a position to help him.